Q.4.   Draw a circle and two lines parallel to a given line such that one is a tangent and the other a secant to the circle.
Sol. We have the required figure.
Here, l is the given line and a circle with centre 0 is drawn. 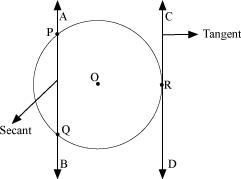 Thus, the option (A) is correct.
Q.4.   Prove that the tangents drawn at the ends of a diameter of a circle are parallel.
Sol. In the figure, we have:
PQ is diameter of the given circle and O is its centre.
Let tangents AB and CD be drawn at the end points of the diameter PQ.
Since the tangent at a point to a circle is perpendicular to the radius through the point.
PQ ⊥ AB ⇒ ∠APQ = 90°

And PQ ⊥ CD ⇒ ∠PQD = 90°
⇒ ∠APQ = ∠PQD
But they form a pair of alternate angles.
AB ∴∴ CD.
Q.5.   Prove that the perpendicular at the point of contact to the tangent to a circle passes through the centre.
Sol. In the figure, the centre of the circle is 0 and tangent AR touches the circle at P. If possible, let PQ be perpendicular to AB such that it is not passing through O.
Join OP.

Since OP is the radius of the smaller circle through P, the point of contact,
∴ OP ⊥ AB
⇒ ∠APB = 90°
Also, a radius perpendicular to a chord bisects the chord.

Hence, the required length of the chord AB is 8 cm.
Q.8.   A quadrilateral ABCD is drawn to circumscribe a circle (see figure). Prove that:
AB + CD = AD + BC
Sol. Since the sides of quadrilateral ABCD, i.e., AB, BC, CD and DA touch the circle at P, Q, R and S respectively, and the lengths of two tangents to a circle from an external point are equal. 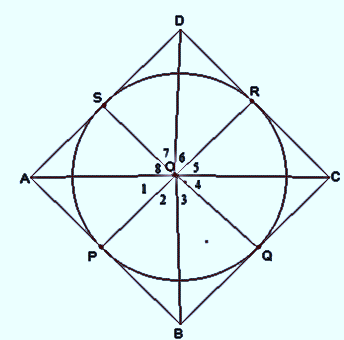