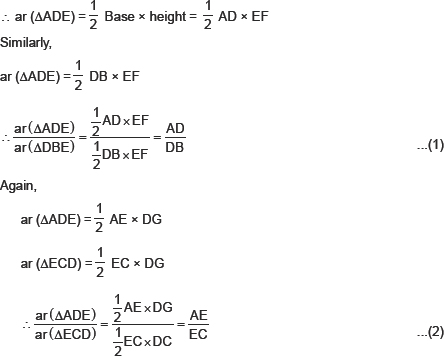 Sol. (i) Since DE || BC
∴ Using the Basic proportionality Theorem, 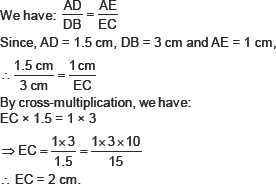 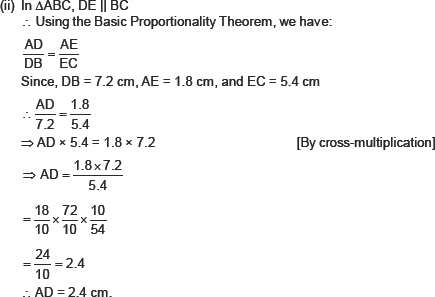 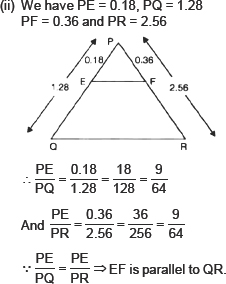 Sol. In ΔABC,
∵LM || CB [Given]
∴Using the Basic Proportionality Theorem, we have: 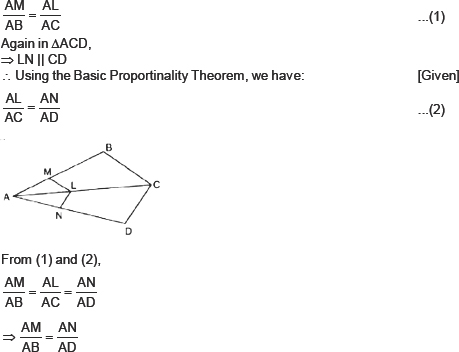 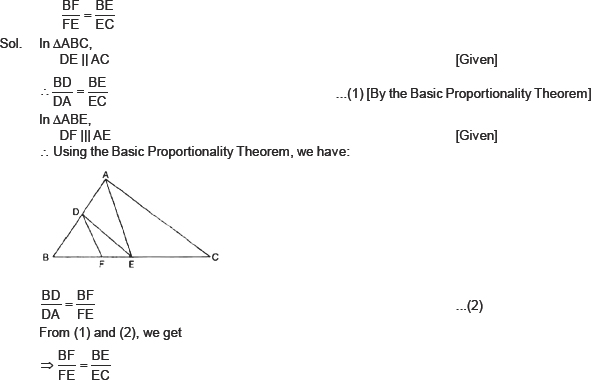 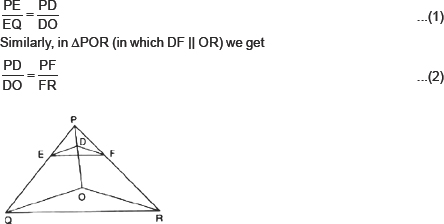 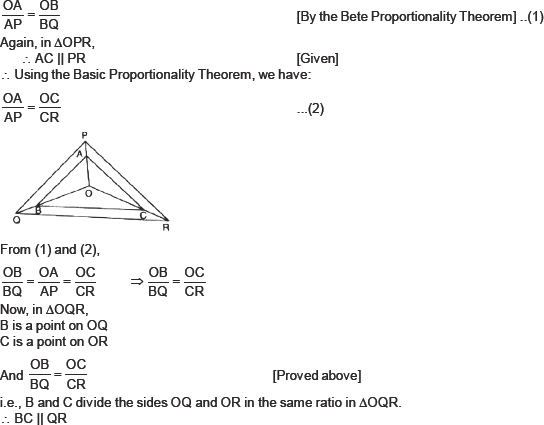 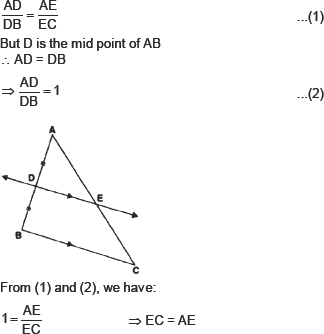 ⇒ E is the mid point of AC: Hence lii is proved tht “a line through the Mid-point of one side of a triangle parallel to another side bisects the third side.”
8.       Using Thales’ Theorem 6.2, prove that the line joining the mid-points of any two sides of a triangle is parallel to the third side. (Recall that you have done it in Class IX).
Sol. Given. A triangle ABE in which a line l intersects AB at D and AC at
E, such that:

Sol. We have, a trapezium ABCD such that AB || DC. The diago as AC and BD intersect each other at O.
Let us draw OE parallel toTeither AB or DC.
In ΔADC,
∵OE || DC [By construction]
∴ Using the Basic -Proportionality theorem, we get 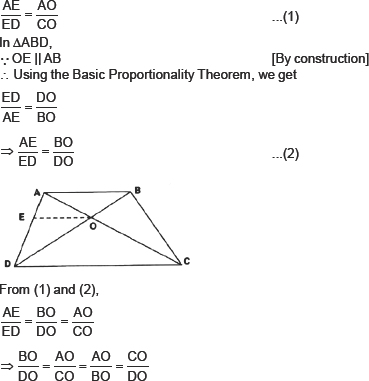 10.       The diagonals of a quadrilateral ABCD intersect each other at the point 0 such that

Show that ABCD is a trapezium.
Sol. We have a trapezium ABCD in which diagonals AC end BD intersect Ich other at O such that

∴ Using the Basic Proportionality Theorem, we get 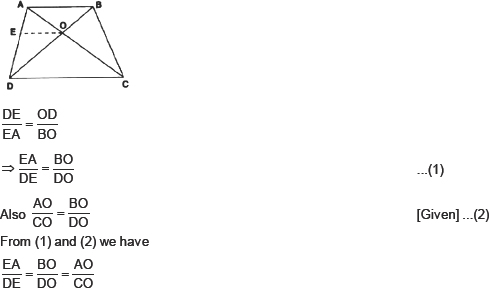 i.e., the points 0 and E on the sides AB and AC (of ΔADB) respectively in the same ratio.
∴ Using the converse of the Basic proportionality Theorem, we have
OE || DC and OE ||AB
⇒ AB || DC
⇒ ABCD is a trapezium.
EXERCISE 6.3
1.       State which pairs of triangles in the figures, are similar. Write the similarity criteria used by you for answering the question and also write the pairs of similaltfriangles in the symbolic form: 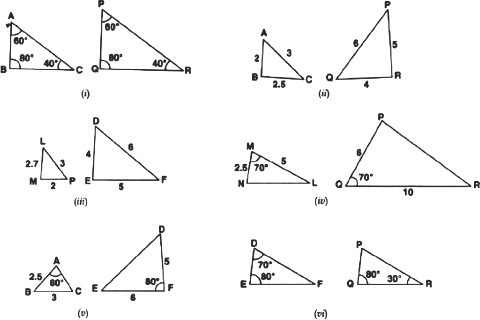 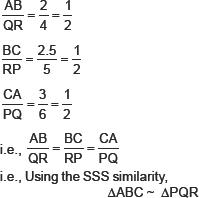 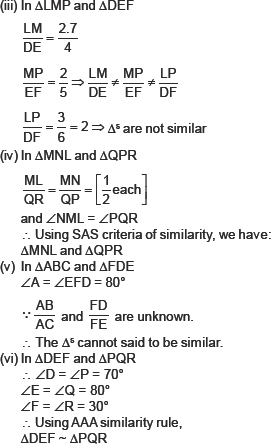 Sol. We,have a parallelogram ABCD in which AD is produced to E and BE is joined such that BE intersects CD at F.
Now, in ΔABE and ΔCFB
∠BAE = ∠FCB
[Opp. angles of a || gm are always equal]
∠AEB = ∠CBF
[∵Parallel sides are intersected by the transversal BE]
Now, using AA similarity, we have
ΔABE and ΔCFB
9.       In the figure, ABC and AMP are two right triangles, right angle at B and M respectively. Prove that:

∴ Using AA similarity, we have
ΔABC ~ ΔAMP
(ii) ΔABC ~ ΔAMP
[As proved above]
∴ Their corresponding sides are proportional.

10.       CD and GH are respectively the bisectors of ∠ACB and ∠EGFsuch that D and H lie on sides AB and FE of ΔABG amd ΔEFG respectively. If ΔABC ~ ΔFEG, show that:

From (1) and (2), we have
ΔABD ~ ΔECF
[AA criteria of similarity]
12.       Sides AB and BC’a d median AD of.hqriangle ABC are respectively proportional to sides PQ and QR and median PM of ΔPQR (see figure). Show that ΔABC ~ ΔPQR.
Sol. We have ΔABC and ΔPQR in which AD and PM are medial sfeorfesponding to sides BC and QR respectively such, that

14.       Sides AB and AC and median AD of a triangle ABC are respectively proportional to sides PQ and PR and median PM of another ,triangle PQR. Show that ΔABC ~ ΔPQR.
Sol. We have two As ABC and PQR such that AD and PM are medians corresponding to BC and QR respectively. Also 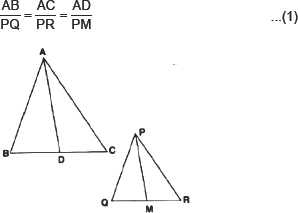 Thus, the required height of the tower is 42 m.
16.       If AD and PM are medians of triangles ABC and PQR, respectively where ΔABC ~ ΔPQR, prove that

Sol. We have ΔABC ~ ΔPQR such that AD and PM are the medians corresponding to the sides BC and QR respectively.

∵ΔABC ~ ΔPQR
And the corresponding sides of similar triangles are proportional. 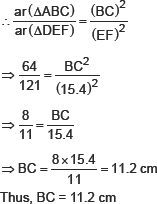 2.       Diagonals of a trapezium ABCD With AB || DC intersect each other at the point O. If AB = 2 CD, find the ratieof the areas of triangles AOB and COD.

3.       In the figure, ABC and DBC are two triangles on the same base BC. If AD intersects BC at O, show that

4.       If the areas of two similar triangles are equal, prove that they dre congruent.

Sol. We have ΔABC and ΔDEF, such that ΔABC ~ ΔDEF and ar(ΔABC) = ar (ΔDEF).
Since, the ratio of areas of two sinular triangles is equal to the square of, the ratio of their corresponding sides. 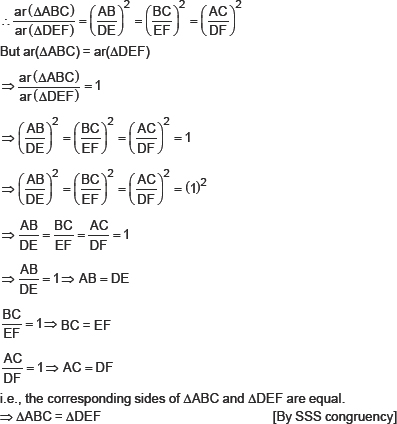 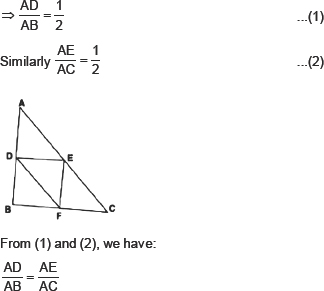 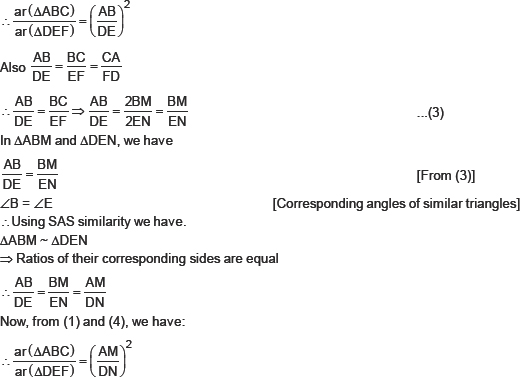 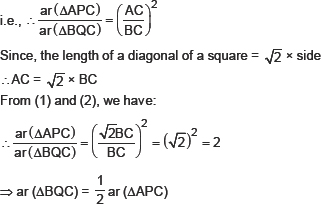 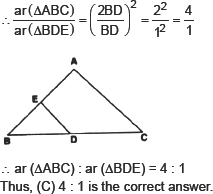 ∴ Their corresponding sides are proportional 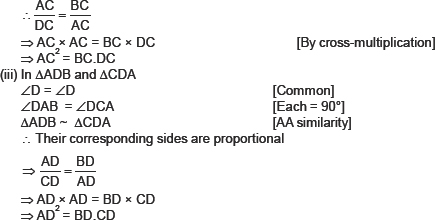 Similarly, each of the other altitudes are

Thus, the distance of the foot of the ladder from’ the base to the all is 6 m.
10.       A guy wire attached to a vertical pole of height 18 m is 24 m long and has a stake attached to the other end. How far from the base of the should the stake be driven so that the wire will be taut?
Sol. Let AB is the wireand BC is the vertical pole. The point A is the stake.
∴ AB = 24 m, BC = 18 m
Now, in the right ΔAAC, using Pythagoilas Theorem, we have:

Thus, the stake is required to be taken at

hours?
Sol. Let the point A represent the airport.
Let the plane-I fly towards North

∴ Distance of the plane-l from the airport after

Let the plane-II flies towards West,

∴ Distance of the plane-lI from the airport after

hours the two planes are

Now, substituting the values of CD and BD in (3), we get 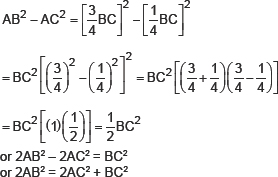 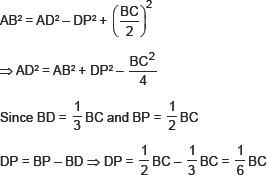 Using the Basic Proportionality Theorem, we have:

∴ Their corresponding sides are proportional. 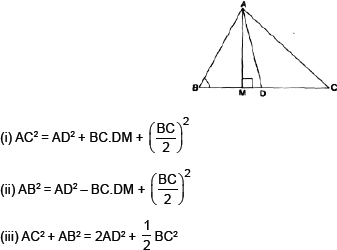 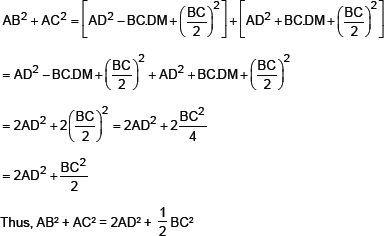 AC and BD are the diagonals of ||gm ABCD.
Diagonals of a || gm bisect each other.
∴ O is the mid-point of AC and BD.
Now, in ΔABC,
BO is a median

Also, in ΔADC,
Do is a median, 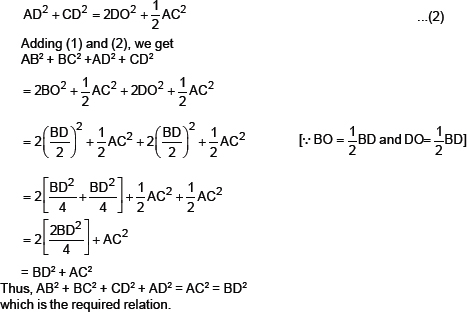 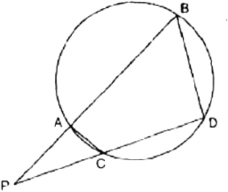 Prove that AD is the bisector of ∠BAC.
Sol.   Let us produce BA to E such that

From (2) and (4), we have
∠BAD = ∠CAD
⇒ AD is bisector of ∠BAC.
Q10.       Nazima is fly fishing in a stream. The tip of her fishing rod is 1.8m above the surface of the water and the fly at the end of the string rests on the water 3.6 m away and 2.4m from a point directly under the tip of the rod. Assumring that her string (from the tip of hr rod to the fly) is taut, how much string does she have out (see figure)? is she pulls in the string at the rate of 5 cm per second, what will be the horizontal distance of the fly from her after 12 secdons?