Class VIII Science
Notes for Combustion and Flame
Introduction
People generally use wood, cowdung cakes, crop residues, kerosene oil, coke or LPG gas to cook food. For ruining vehicles, we use petrol or diesel oil. In factories, we use coal or fuel oil or natural gas.
The materials, such as wood, coke, LPG (liquid petroleum gas), petrol, diesel, natural gas have one property [n common, i.e., they produce heat on burning which is then put into different uses. Furthermore, some materials on burning produce flame and some do not. For example, a candle or coal gas on burning produces a flame, but not the coal or charcoal. So, let us study the chemical process of burning and the types of flame produced during this process.
Combustion
Some substances, like magnesium catches fire and burns with a dazzling white flame when heated in air. Similarly, when a piece of per is brought near a candle flame, it burns, producing heat and light. The charcoal and coal bums in air producing carbon dioxide, heat and light.
Air or oxygen which helps in burning is called supporter of combustion and the chemical reaction which takes place with the release of heat and light energy is called combustion.
A chemical process in which a substance reacts with oxygen to give off heat is called combustion.
The substances which undergo combustion are known as combustible substances. It may also be called a fuel.
Sometimes, heat is accompanied by light, either as a flame or as a glow, during combustion.
Fuel may be solid, liquid or gas. A combustion reaction maybe written as-
(a)   Charcoal burns in air to give carbon dioxide and heat.
C + O2 → CO2 + Heat
(b) Methane bums in air forming carbon dioxide, water and heat.
CH4 + 2O2 → CO2 + 2H2O + Heat
Test Yourself
1.   Which of the following is combustible?
(a) Iron nail
(b) Glass
(c) Stone pieces
(d) Paper
2.   Combustion is a
(a) physical process
(b) chemica
(c) Both (a) & (b)
(d) None
Conditions required for combustion
Now, let us study the conditions under which combustion takes place with the help of following activities.
Booster 1
Why is the person caught in fire, is covered with a blanket?
Explanation
If the clothes of a person catch fire, he is immediately wrapped in a thick blanket. The blanket cuts off the supply of air i.e. the supporter of combustion and hence the fire is put off.
Let us we some more activities to team more about combustion. Can a matchstick burn on its own? Can we bum a wood piece by a lighted matchstick? The answer to these questions Is - No.
This shows that different substances bum at different temperatures. Some minimum temperature is essential for burning a combustible substance, before it catches fire. This minimum temperature is called ignition temperature.
Ignition temperature: It is the minimum temperature to which a combustible substance must be heated, before it catches fire.
Therefore, we see that a combustible substance cannot catch fire as long as its temperature is lower than its ignition temperature e.g. Ignition temperature of phosphorus is 35 °C. So, unless phosphorus is heated to 35 °C, it will not catch fire. However, if temperature of air is 35°C or more, phosphorus will catch fire without heating. Similarly, Kerosene oil and wood do not catch fire on their own at room temperature. But if both are heated a little, than kerosene oil will catch fire and not wood. This shows that ignition temperature of kerosene oil is lower than that of wood. Lets we the following activity which shows that a substance cannot bum until it reaches its ignition temperature.
Booster 2
Why does the fire goes off when water is poured over burning wood?
Explanation
It happens because water absorbs a large amount of heat energy, which results in fall in the temperature of wood below its ignition temperature and the fire goes off.
Test Yourself
1.   What do you mean by supporter of combustion?
2.   Name a gas which is a non-supporter of combustion.
Ho do we control fire?
We have seen homes, shops and factories caught in fire. How can the fire be controlled from spreading? Generally, water is used to control fire. Water brings down the temperature of the combustible substance below its ignition temperature. The water vapour surrounds the combustible material, thus helping in cutting off the supply of air. So, that the fire is extinguished. 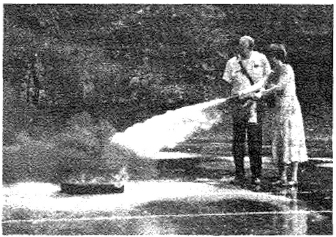 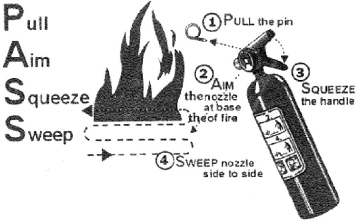 Fig.9 Follow PASS.
Soda - acid fire extinguisher: Carbon dioxide liberated by the reaction of sulphuric acid with sodium bicarbonate solution comes out with a stream of liquid water at high pressure. Water puts off the fire by lowering the temperature of the combustible material below its ignition temperature and carbon dioxide cut off the supply of air to the combustible substance. 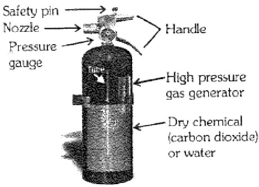 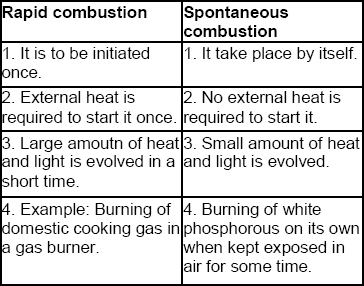 Booster 3
Forest fires are a result of which type of combustion and why ?
Explanation
Forest fires are the result of spontaneous combustion because of the following factors
(i)   presence of a combustible substance
(ii)   presence of right ignition temperature
(iii)   presence of supporter of combustion in air
Test Yourself
1.   What are forest fires?
2.   Why CO2 is considered as the best fire extinguisher?
Flame
Look at the combustible substances around you and try to find whether on burning some of these materials (given below) forms a flame or not.
Flame: A region of burning gases is called flame.. 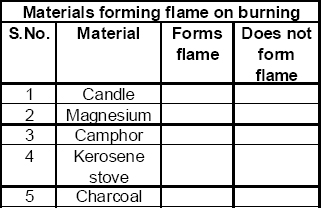 A substance will burn with a flame, only if some gaseous substance is there to burn.
Booster 4
Why does a matchstick produce a flame on burning?
Explanation
When the matchstick catches fire or is burnt, the heat released due to the burning of chemicals on the match head, partly decomposes the wood to form wood gas. The wood gas then catches fire and produces a flame.
Structure of a flame
In order to understand the structure of a flame, light a wax candle and watch its flame. Carefully note the
different coloured zones in the flame. Starting from the base of the flame, a flame has four zones.
(1)   Blue zone: It is near the base of the flame. Vaporised wax gets oxidised to carbon monoxide and carbon monoxide bums completely with a blue flame in this zone.
(2)   Dark inner zone: Surrounding the wick is the dark zone. There is no burning in this zone. If we pass a wooden splinter through the dark zone of the flame, it comes out unscrotched (unbumt) showing that there is no ‘burning’ in this zone. However, some =burnt wax vapours are present in this zone.
(3)   Luminous zone: In this region of the flame hydrogen burns with a brilliant yellow luminous flame. Burning hydrogen combines with oxygen to form water vapour. Carbon also burns in this zone giving some luminosity to the flame and producing carbon dioxide. Some unbumt carbon particles are left which give rise to soot.
(4)   Outermost non-luminous zone: This zone is poorly visible and is slightly blue. It is the hottest part of the flame where complete oxidation (burning) of the fuel is taking place. 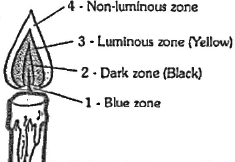 Test Yourself
1.   Which one of the following is fuel of our body?
(a) Petrol
(b) Diesel
(c) Food
(d) Water
2.   Name the currency of energy in our by.
Booster 5
Why do goldsmiths use the outermost zone of the flame for melting gold and silver?
Explanation
Goldsmiths, use the outermost zone or non-luminous part of the flame for melting or shaping gold and silver ornaments. They direct the non-luminous part of the flame of candle on the gold with the help of a blow pipe. fps the temperature of this part of the flame is around 1300°C, it is sufficient to melt gold at specific point and thus helps goldsmiths to give proper shape to the gold ornaments.
What is Fuel?
Any substance which is easily available and burns in air at a moderate rate, producing a large amount of heat energy, without leaving behind any undesirable residue is called fuel.
Example: wood, charcoal, petrol, kerosene, etc.
Booster 6
Why is sulphur not used as a fuel even though it can bum in air to produce heat?
Explanation
Sulphur is easily available in nature and can bum in air to produce heat. However, it is not a fuel because on burning, it forms a poisonous gas, SO2 , which can cause serious respiratory problems and can even be fatal.
Ideal Fuel
There is probably no fuel that could be considered as an ideal fuel. We should look for a fuel which fulfils most of the requirements for a particular use.
Characteristics of a good fuel
(1)   It should be cheap and readily available.
(2)   It should be easy to store.
(3)   It should bum at a slow rate and its combustion should be controllable
(4)   It should have low ignition temperature.
(5)   It should produce very small amount of residues such as ash.
(6)   It should have large calorific value.
(7)   It should not produce gases which pollute the air.
(8)   It should not produce any hazards during transportation.
Classification of fuels
On the basis of physical state, fuels are classified into three parts.
1.   Solid fuels: The fuels which occur In a solid state at room temperature are called solid fuels. Example: Wood, agricultural residues, charcoal, coal, coke, etc.
2.   Liquids fuels: The fuels which occur in a liquid state at room temperature are called liquid fuels. Example: Liquefied hydrogen, petrol, oil, kerosene, diesel, etc.
3.   Gaseous fueils: The fuels which occur in a gaseous state at room temperature are called gaseous fuels.
Example: Water gas, producer gas, coal gas, compressed natural gas (CNG) and gobar gas, etc.
Fuel efficiency
The amount of heat energy produced on completely burning one Kilogram of fuel (in 02) is called the calorific value of a fuel. The more is the calorific value of a fuel, more is the efficiency of the fuel. The calorific value of the fuels is expressed in Kilojoules per kilogram (kJ/kg) or kilojoules per gram (kJ/g). The calorific value of common solids, liquids and gaseous fuels is given below.
Calorific value of solid fuels

Harmful effects of burning fuels
The increasing fuel consumption has harmful effects on the environment. The main products formed during the fuel combustion which produce harmful effect are:
1.   Carbon fuels like wood, coal, petroleum release unburnt carbon particles. These fine particles are dangerous pollutants causing respiratory disease, such as asthma.
2.   Incomplete combustion forms carbon monoxide gas. It is very poisonous gas. It is dangerous to burn coal in a closed room. The carbon monoxide gas produced can kill persons sleeping in that room.
3.   Combustion of most fuels releases carbon dioxide in the environment. Increased percentage of carbon dioxide in the air causes global warming. Global warning is the rise in temperature of the earth. This result in rrrre1ting of polar glaciers. This leads to rise in sea level and floods in the sea coast.
4.   Burning of coal and diesel release sulphur dioxide gas. It is an extremely suffocating and corrosive gas. Sulphur dioxide and nitrogen oxide dissolve in rain water to form acid. Such rain is called acid rain. It is very harmful for crops, buildings and soil.
5.   Wood is also used as a fuel. Burning of wood gives a lot of smoke which causes air pollution and is also very harmful for humans. It may lead to many respiratory problems. Cutting of trees for obtaining wood Leads to deforestation which is quite harmful to environment.
6.   Carbon particles of smoke or the ash get suspended in the air. Excessive amount of them in the air causes breathing problems.